Nowadays most helicopter operations take place under VFR (Visual Flight Rules), driven by strict flight visibility and distance from the clouds requirements for day and night operations. Helicopter operators have to meet the VMC and this might result in a burden for their operations in controlled airspace.

Existing instrument design criteria for fixed wing aircraft are very restrictive for helicopters and they typically impose unnecessary limitations in the helicopter operations. However, the introduction of the GNSS technology into the flight procedure design domain allows the definition and development of helicopter approach and departure procedures under IFR, which are called PinS procedures.

PinS (Point-in-Space) procedures are based on GNSS and are designed to be used by helicopters only. This concept relies on the possibility for the pilot to conduct flight under IMC to/from a PinS and not directly to/from the heliport, supporting IFR procedures on instrument and non-instrument landing locations.

The flexibility of PinS departure and approach operations is manifold: they can be designed in controlled and uncontrolled airspace; for instrument or non-instrument landing locations; in hostile and obstacle-rich environments; for a direct or circling/manoeuvring approach, etc. 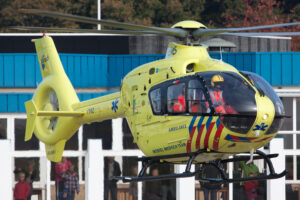 We worked with ANWB-MAA pilots to facilitate PinS procedures between four Wadden Islands and Leeuwarden Air Base.